"Minister McEntee informed me today the report of mental health services will be completed in early March. The Minister also advised me that the HSE has raised the issue of delay with the independent investigation team on a number of occasions.  The investigators have explained that due to the large number of interested parties and the fact that many have relocated or retired the interviewing process and the due process following this have been elongated."

Senator Hopkins continued “the review of mental health services was commissioned on 28th August 2015, which is over a year and a half ago.  This review is examining the quality, safety and governance of our local mental health services.  The people of Roscommon have waited long enough at this stage and it is really important that it is made available as quickly as possible.  I do expect this report to identify weaknesses within the mental health services in Roscommon. I also expect it to provide recommendations for improvement.

Our focus must be on providing a more positive and improving service for people with mental health difficulties."
Posted by Maura Hopkins Fine Gael at 14:16

Senator Hopkins stated that she "was informed early by the Department of Children and Youth Affairs that full funding remains in place for youth services in Roscommon and North East Galway this year.  I have been advised that Youth Work Ireland Roscommon East Galway has lost the funding for delivery of these youth services because they were unable to meet the terms and conditions attached.  Replacement service providers are being assessed and the funding will be allocated once in place."

Senator Hopkins continued "it is really important for the general public that we are assured and convinced that the services are being delivered to a high standard to meet the needs of vulnerable young people. We must have confidence in the governance of organisations providing these and other services, we have too many examples of poor structures in other organisations resulting in inefficient use of hard earned taxpayer's money."

"Currently, the Roscommon Galway Education and Training Board with the Department are conducting a needs analysis of young people's needs within this area.  They are in the process of putting in place a replacement quality service. This service will be provided on an interim basis at first with plans for a permanent targeted service to be put in place later this year across Roscommon and North East Galway."

Senator Hopkins also stated "the Phoenix Centre in Ballaghaderreen has been supporting a large number of individuals and local groups and organisations within the town and surrounding area for a long period of time and it is vital that it reopens as soon as possible.  Ongoing negotiations are actively taking place to ensure this happens and that an improved service for our young people is provided."

I am extremely disappointed that there has been no engagement or consultation with the people of Ballaghaderreen, we deserve better than this. We are a very close-knit community and this type of project needs community support to be successful. We are a welcoming people in Ballaghaderreen and it is very much a multicultural town. I understand fully that Ballaghaderreen and County Roscommon must play our part and do our fair share in terms of supporting refugees who have been through horrific experiences.  Doing our fair share involves ensuring that the number of people we help is linked directly to the capacity of the town to provide a highly supportive environment.  It also means ensuring specialist and additional resources are provided such as GP’s, teachers, nurses, interpreters, psychologists, dieticians among others.

I am concerned that Department of Justice officials have assessed the Abbeyfield Hotel site with it's 40 bedrooms and 29 apartments as having the potential to accommodate up to 250 people at any one time.  We must absolutely ensure that we are realistic and practical about the number of people on site at any one time in terms of Ballaghaderreen’s capacity to care for these people and provide the support they need.

I have meetings with Department Officials on Wednesday to discuss these plans in depth and to communicate the concerns of the Ballaghaderreen community. I am not convinced at all that sufficient plans are in place for this at present. I have emphasised strongly to Minister David Stanton and Minister Frances Fitzgerald that we need to know what extra resources and support services will be put in place in order to be convinced that these people will be properly supported.

Senator Hopkins said “I have received a number of calls from farmers and members of farming organisations who have been forced to house animals due to saturated soils. Many of these farmers have been unable to empty their slurry tanks and have requested assistance with securing an extension to the slurry spreading date beyond October 15th.  I have communicated these concerns to Minister Creed over recent weeks encouraging him to explore the possibility of extending the slurry spreading date".

Senator Hopkins continued, "I have also made representations to Minister Creed on behalf of a number of Tillage farmers whose crops have been badly affected by the wet weather. Some have managed to harvest crops but yields and quality are very poor and some farmers have been unable to harvest some of their crops."

"I have asked the Minister to explore ways of assisting these farmers. Establishing these crops incurs very high input costs so decimation of the crop or poor yields is crippling financially for these farmers".

Senator Hopkins concluded by saying “Minister Creed has assured me that he and his Department is aware of the impact the prolonged bad weather is having on tillage farmers and on farmers who still need to spread slurry especially those on marginal land.

"He is aware the October 15th deadline is fast approaching and he knows many farmers are very concerned. I have strongly encouraged him to do everything possible to help affected famers during this period".
Posted by Maura Hopkins Fine Gael at 07:27

Hopkins calls for Restoration of Telephone Allowance in Budget 2017

Senator Maura Hopkins has called for a restoration of the Telephone Allowance as part of the Department of Social Protection's budget for 2017.

“Many pensioners have spoken to me about the telephone allowance, highlighting  its real benefits and highlighting the need for the government to prioritise funding for its reintroduction."

She went on to say “I have raised this issue with Minister for Social Protection, Leo Varadkar TD on many occasions, he is very aware of benefits of the allowance. As the economy is slowly starting to recover, I have called on Minister Varadkar to strongly consider restoration of the telephone allowance in budget 2017."

“The value of a telephone cannot be understated, many pensioners rely on it to help them connect with family, neighbours and avail of services. The phone is vital for organising social outings, medical appointments, transport, running home security systems such as panic buttons and helps greatly to reduce loneliness and isolation."

Senator Hopkins concluded, “I am very aware that for many pensioners, finding money to pay the telephone bill can be very difficult. I will continue to raise this matter with Minister Varadkar as it is very important that we do all we can to help our older people maintain their connection with their families and communities."
Posted by Maura Hopkins Fine Gael at 07:25

Senator Hopkins said “ I have met with a large number of people across the constituency involved in text alert groups. Hearing people describe the positivity the text alert group brings to their communities especially in improving people’s sense of security is very encouraging”.

The funding for the Community Alert Programme has been doubled to €350,000 and now incorporates a new €100,000 rebate scheme for local groups registered under the Garda Text Alert Scheme.

Senator Hopkins stated “this funding will help groups reduce the costs associated with running the group and circulating information. It is a strong recognition of the importance of these groups in assisting Gardai to protect their community."

"The multifaceted approach of increasing support for Garda txt alert groups, rapidly accelerating new Garda recruitment, increasing funding for Garda vehicles and equipment and the introduction of specific legislation to deal with repeat burglary offenders and organised gangs is all working in a definite attempt to combat crime and help make our communities safer."

Applications can be made by contacting Muintir na Tire on 062–51163 or at rebates@muintir.ie and completing a simple form before the end of October 2016.

Senator Hopkins concluded by saying “I am happy this funding has been made available but I will continue to encourage Tánaiste Fitzgerald to continue to increase the funding for these groups into the future."

"Additional resources generated from our improving economy will also allow us to be proactive in continuing to increase Garda numbers and reopen Garda stations in areas identified as needing additional supports."
Posted by Maura Hopkins Fine Gael at 07:24 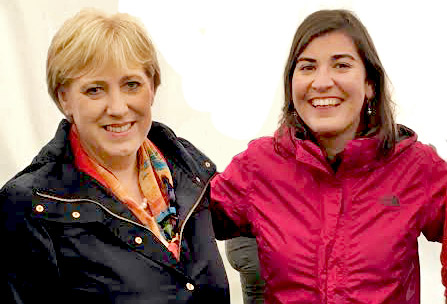 Fine Gael Senator Maura Hopkins has said that communities in Roscommon are to benefit from a €5 million national initiative to support Rural Economic Development.
Minister for Arts, Heritage, Regional, Rural and Gaeltacht Affairs, Heather Humphreys announced details of a new phase of the Rural Economic Development Zones (REDZ) initiative, to stimulate economic development in rural towns and their hinterlands. Under the 2016 scheme, every county in the country will receive approval for at least one REDZ project.
Attending the Ploughing Championships with Minister Humphries on Wednesday, Senator Hopkins said that “this funding will be important to our communities within county Roscommon”.
“This REDZ scheme along with the Town & Village Renewal Scheme of €10 million is only the start of our work to ensure that all rural areas in particular feel the benefit of the economic recovery.”
“The 2016 REDZ scheme will provide up to 80% financial support for proposed projects, with the balance of costs to be provided from other sources such as local Authorities, business interests or community-based funding”.
“I will continue to work hard alongside relevant officials, town teams across the county and community groups to ensure both of these schemes encourage and support projects with value that have a strong positive impact in our rural communities.
“It is also critical though that continued emphasis and funding be made available to our rural communities in the upcoming budget”.
Posted by Maura Hopkins Fine Gael at 04:55